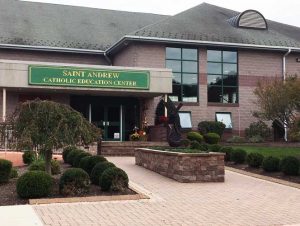 Saint Andrew Catholic School is 94 years old. Begun in August of 1927, at the request of the Reverend John T. Brady, the Sisters, Servants of the Immaculate Heart of Mary staffed the original school.  Located behind the Olde Church of Saint Andrew on Sycamore Street, the school was a two-room building with forty-seven students.

On January 9, 1995, the Saint Andrew Catholic Education Center, at its current location on Wrights Road, opened its doors to the community.  At the time, the five and a half million-dollar three-story building was the first new Catholic elementary school in twenty-five years in the Archdiocese of Philadelphia.  Over the next seven years, more than two million dollars were spent on over twenty thousand square feet of additional space. Classrooms, a cafeteria and a multi-purpose room were added.  Currently, the school has 37 classrooms, cafeteria, gymnasium, multi-purpose room, library, computer and science labs, bank branch and a chapel.

Saint Andrew Catholic School has come a long way from humble beginnings.  Considered a flagship school in the Archdiocese of Philadelphia, the school is one of the biggest and most vibrant.  Known for strong Catholic identity and rigorous academics, Saint Andrew Catholic School is a 2013 and 2021 National Blue Ribbon School of Excellence, a 2019 and 2021 Archdiocese of Philadelphia School of Distinguished Instruction and is accredited by Cognia, formerly AdvancED.